Susan Howe is hard to teach. She’s one of our most important poets, doing something no one else is, at least not at the white heat she is – wandering the shelves of musty archives, brushing on the wilderness of the otherwise forgotten language stashed there. A materialist transcendentalist, busting through dualities we thought constrained our thought, such as mind and body

Mulberry tree becomes silk moth becomes silk. Green valley becomes a green cloud that hides it. The ghost in the machine is real and it is the machine. There are no discontinuities. Thus rapture, a coming invited, and, beat, proclaimed.

So much there. But she’s dense, allusive, often hermetic. Students can dismiss her as dry and academic, verbose. You have to keep all your book learning online, probably do some research too, even as you keep your soul naked to the mystery the spaces between the words shine with – it’s asking a lot, and students can lose courage.

And yet my Art of Compo course did good heavy lifting last week with the title poem of Souls of the Labadie Tract. This morning, though, something different. Her work lives on the edge where rational and speechless apprehensions meet, and where reading becomes so overfull, it writes. In that space, this group assignment.

We’ve noticed the role little scraps of paper have in this book. Howe describes how Jonathan Edwards would, when riding in the course of his ministry, as “an idea occurred to him, … pin a small piece of paper on his clothing, fixing in his mind an association between the location of the paper and the particular insight.” (The paper remained blank. The body in motion was a memory palace.) And Wallace Stevens, who walking to work “observed, meditated, conceived and jotted down ideas and singular perceptions, often on the backs of envelopes and old laundry bills cut into two-by-four inch scraps he carried in his pocket.”

Now, you do likewise, sort of. Working together, using

compose a poem that expresses your understanding of Souls of the Labadie Tract.

They’re a good group, well knit, so the unsurety didn’t last long. Soon they’d left their chairs around the ringed seminar tables, for a cross-legged circle on the floor inside them. (That circle became the final form of their poem.) They each came up with their own way of gleaning words from the text. A post-it would do the rounds, found text accreting to it as it passed through each student’s hands, whatever scrap of language seemed – crucially, intuitively – to belong.

They decided the board was the place to assemble it. My main intervention was to remind them of the chance element (we’d looked at Howe’s use of errand, and its kissing cousins errant and error). “Maybe flip a coin to decide which ones go in the poem?” Instead they rolled a D20 (one is a D&D gamer) to decide their order. A bit shaky, to an aleatory purist, since there were more than 20 post-its; but I wasn’t going to suddenly go hands-on. 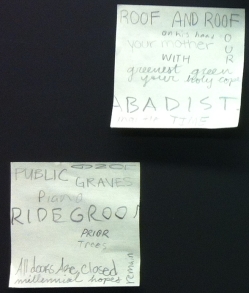 Not too shabby for an hour and a quarter’s work.

And, we had deviled eggs and blueberry and chocolate chip pancakes for breakfast. Do I complain about teaching sometimes? Stop me.

A few responses to the treated page exercise I gave my students as we met and read and viewed and wrestled with Tom Phillips’s A Humument. All struck me. Each differs from the others plenty. None imitates Phillips servilely. All take care with their erasural gestures, understand them to be, as they are, presences in their own right.

One that foreswears mimesis almost entirely and uses abstract form pattern and colour to expose the ickiness of its source text’s speaker. (A lot depends with this exercise on the right kind of friction with one’s source text.)

One that goes maximal, takes erasure as a baroque occasion. (I neglected to note the source text here, oops.) It actually has texture under your fingertips. Glitter that bites back.

And one that goes minimal, erases erasure, or proposes that we omit omission, or something like that, its ironies tangle my head. The source text is Strunk & White’s Elements of Style and it mucks with their most famous pro-imposition, “Omit needless words.” 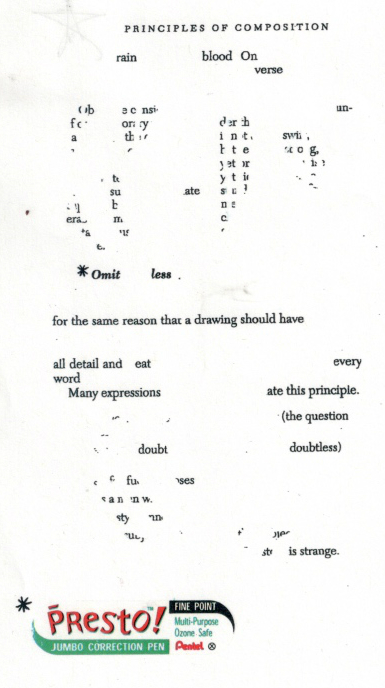 A dismantlement of text that can’t help but call to mind Susan Howe’s, as this from “Fragment of the Wedding Dress of Sarah Pierpont Edwards” in Souls of the Labadie Tract:

(A poet I’ve never had the guts to try to teach.) There were others good, wonderful even, or that didn’t in themselves transcend but were important explorations for their fashioners. There’s in fact no knowing what will beget what. That’s why I don’t grade these, they should be done in great spirited freedom.

In a few I’ll hope to write a bit about my own muckings about with treated pages. Nothing so colourful as these. Also want to write about really good discussions we had today on qualities of line (actual and implied, that’s from Taylor) and the non-blankness of the blank page. First though dinner – steak!

Tearing and pasting, as in the exercises below, can be the initial ground of many sorts of practice. Susan Howe of course is an adept practitioner.