Funny how one thing connects to another. The mind’s a rhizome. In the mix right now for me so many. My friend Elise’s memorial yesterday. (What’s that you ask. Drafted this the day after never finished and come back to it now.) Voices of twins I woke to on NPR a few mornings ago and couldn’t shake from my head and bought the CD on iTunes (I never do that) and now listen to twice daily entracedly. The intertitles of a sweet fond symbolist early silent filmic confection called The Blue Bird by Maurice Tourneur.

A phrase underlined won’t suffice. Must embed them. My friend:

And these amazing haunting singers, somehow right at the core of a cross where sensual & spiritual & naive & old soul meet (okay little crush):

And the only intertitle I can find online from The Blue Bird:

(The sentiment — gah. But — the elegance with which the H curls to encase the quotation mark and the terminal r stretches out to offer shelter to the ellipses. Decadence, sure, but guileless.)

All linking and clicking and clinking in unexpected ways. I have, e.g., and am sure of it, been trying to rescue Elise from the grave by making Inanna of her and bearing her through hell and out the other side. I spoke at the memorial about my propensity for magical thinking but didn’t get into the thick and gristle of it.

I don’t think it’s going to work, I think she’s gone from matter, already metamorphic-indestructible otherwise, but it’s a rite I seem to need to go through. So when I post, in weeks to come, comic book panels collaged out of junk mail depicting Inanna’s trip underearth and back, you can know it’s her, too, my friend, too.

Here are the first two. A bit of opening narration: 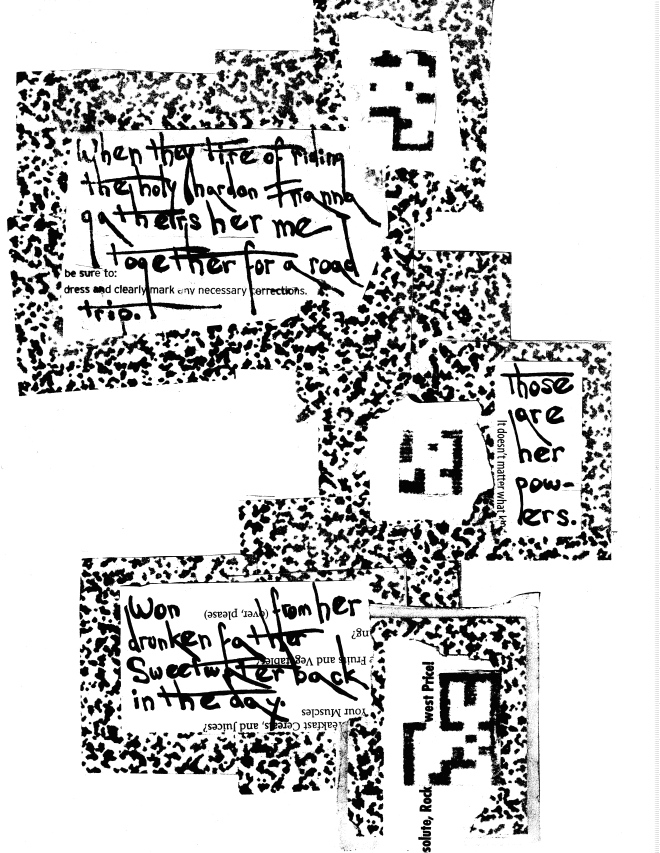 And her setting out: 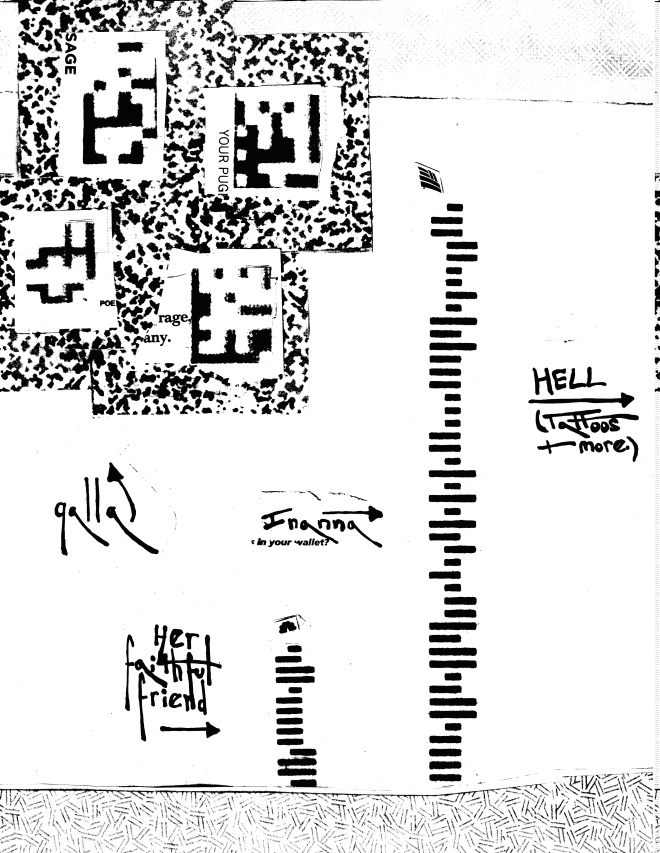 All the visual elements, script aside, are derived from junk mail, mine or friends’. (Sorry about the crud on the right side, my damn scanner.) Galla: demons come to claim their due.

Going in the script for something a bit like cuneiform and a bit like the scribal hand in medieval Old English manuscripts and a bit like graffiti and with a bit of the energy moving my hand through ascenders and descenders and cross-strokes in the moment of marking. A bit of embodiment that’s been a long time coming and I find me greedy for it increasingly.

So that’s what Elise has been up to in here. The intertitles? Ibeyi? Together they suggested a possible elegance —

— about which I’ll hope to have more to say later. For now a link to my friend Kaveh Askari’s book on early cinema including Tourneau’s The Blue Bird: