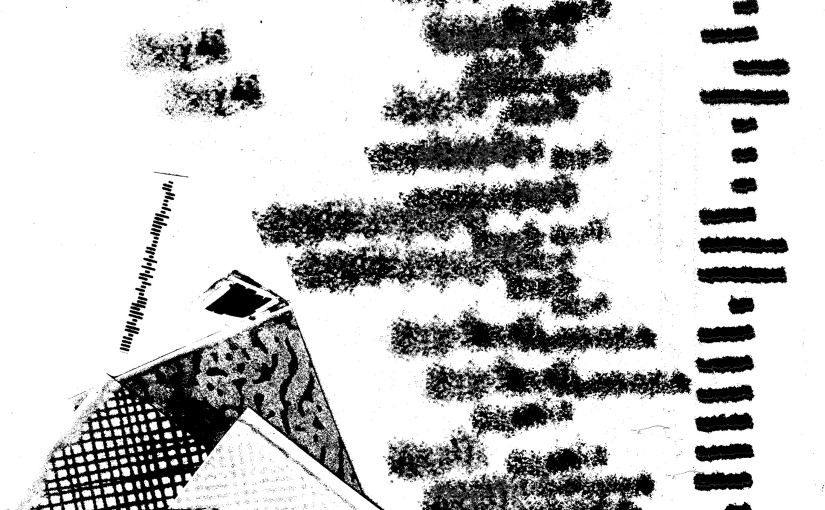 Teaching my compost course, one of the points I make a lot is, how much can be got from how little. E.g., from this scrap

spoke by Ereshkigal, Queen of the U-world, to bright canny way out of her depth sis Inanna, on their first meeting in eons – how are you bitch & die – I got, with some photocopier and computer play, to this asemic poem,

which I hope suggests a face to more than pareidoliac me. From there it wasn’t far to this diplomatic transcript – 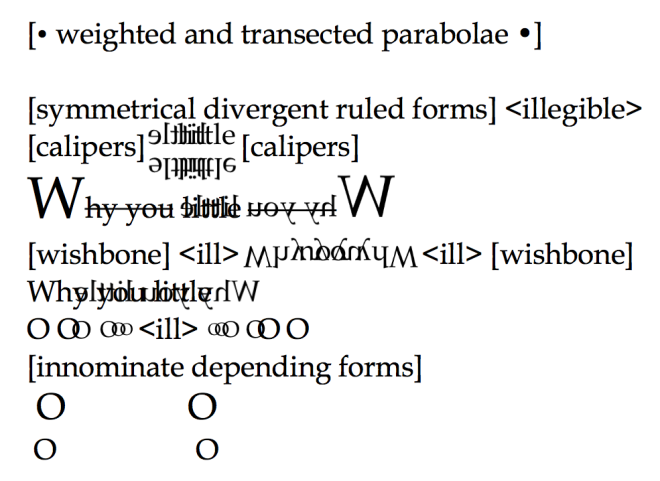 It’s heady, I guess. These transcriptions of my own asemy are the most conceptual half-book of poetry I’ll ever write, likely. Here’s the page whole, to get down to rude felt stuff again, the undermud.

Inanna’s in some trouble. That’s her, down low at the left, hat knocked off, humbled. I made her, she’s bar codes & engine noise, but I do, and I’m not kidding, feel for her. She could die here. I could die here.

The only student I ever put in a poem took her life this summer.

It was just her first initial, and it became an asemic poem. Still though she was there in it with me. She was a checkout clerk at my grocery store and shooting the shit with her after teaching before walking in my front door softened by day a bit.

Then she was my student and we talked some more. Poems, ups and downs, ways to stay more steady through ups & downs. I hoped so, for her.

You want to save all of them. And you can’t and you shouldn’t try – you’d just become annoying. I did that not long ago, trying to save, not the one in front of me, but the one who’d gone.

The poem’s a picture of the face-to-face A. had inside and almost every time she won. I made the ground before I’d met her but it doesn’t matter. Hell only feels private.

One thought on “Facing Ereshkigal”