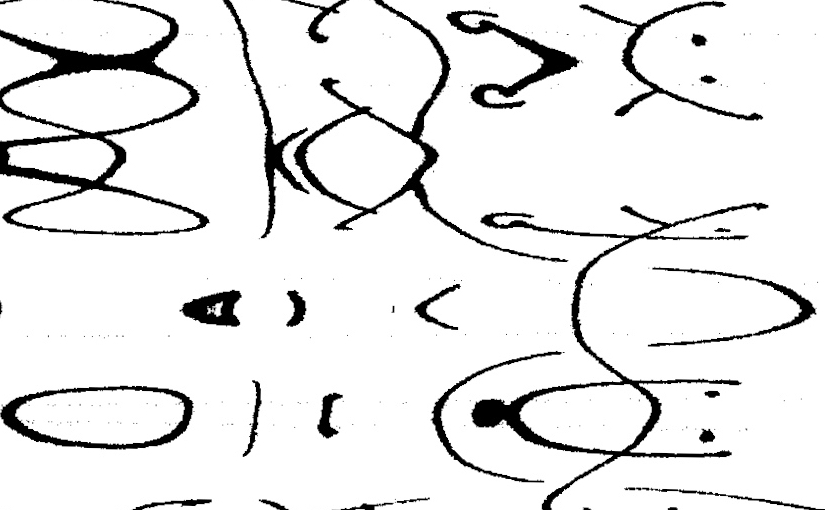 Mother’s Day’s a hard day for me. My mother and I have been estranged for some years. We’ve started talking a bit by e-mail recently, and that’s good, but this day’s still tough, even with all my humanistic skepticism re: the greeting card–industrial complex.

So I did what I usually do when something tough comes up. In no particular order. Meditated. Neglected the dishes. Wrote in my journal. Cut myself some slack. Stared into space thinking/feeling. Neglected a pile of grading. Pulled some weeds. Chitchatted with neighbours passing.

The journal writing (nothing very new vis-a-vis my mother) (inner mother and outer mother) (a distinction for another post) (one maybe never to be writ) (curious? buy my poetry!) after photocopy mojo looks like this.

Veiled, I know. Do I want you to put the work into decipherment? Ish. Confession, I swing madly between nutshell-to-others and severe overshare. Seriously – I mean no glib appropriation here – I’m close to the spectrum on this one. Can’t figure out the norms, read the signals, can only see the shudder or shoulder-turn when I’ve overstepped.

With that proviso – maybe proof of the point it makes – I’ll for once give the source text of the aasemic text above.

Mother’s Day. Not ever an easy day. With the chime of an email arriving came in quick succession—dread of an email from my mother tearing into me for not writing sooner or in a better way—shame, at that feeling—and, a thought, the connection is broken for good isn’t it. As to that shame: thought later: wherefore? The feeling (dread) verifies itself. I mean I would not feel it if I had never had reason to feel it. So—I thought later working at weeding—instead of shame, maybe, sadness. That I think is what comes in when the shame steps aside a little—sadness, for me, for her too, in the grip of she knew not what———.

I want to affirm three friends, all mothers, who’ve borne me up today.

One, Beth Thomas, an old friend from New York, who told the truth for her about Mother’s Day today on FB and made me feel bold to do likewise.

Another, S., even longer a friend, who wrote to me today

And thinking of you because it’s that day again – how is it that day again so quickly? – and I know it’s a hard one for you. As always, I hope you not just know but believe and feel that you’re loved.

Third, came to me a memory of a student in our program, she’s a mother, maybe a month ago we were both at a reading, her son was with her. And seeing, late in the evening, how heavily and easily her son draped in her arms sleeping – how quietly and carefully she packed up her bag, his toys etc., so as not to wake him – how fixed even so, all the while, her attention was on the reader reading, taking the words in.

Is it strange of me? Do you find it ordinary? It was so moving to me, her undividedness, her totally being nourished by what she was there for – the poetry – and being totally there as what her son needed her to be.

I need, as we all do, to be mother to myself, and lack, as many do, a good interior image of that. And so I savage me.

A lot of my inner life is trying to find relief from that.

Some relief comes from inner resources. Some more comes from chosen works – teaching, say, though I should be grading right now. And some comes from blessings like rain – friendships like these three.

She’s also, that third one, one of the most kickass poets I’ve worked with.

We ask a lot of mothers (fathers also) (children also).

Who are we that we think we get to ask so much.

Donald Drumpf. That’s your koan. Pass it and I’ll vote for you.

Be a mother to what needs you to.

Something, someone, in here, out there, do.

Have I tucked this where none will see it?