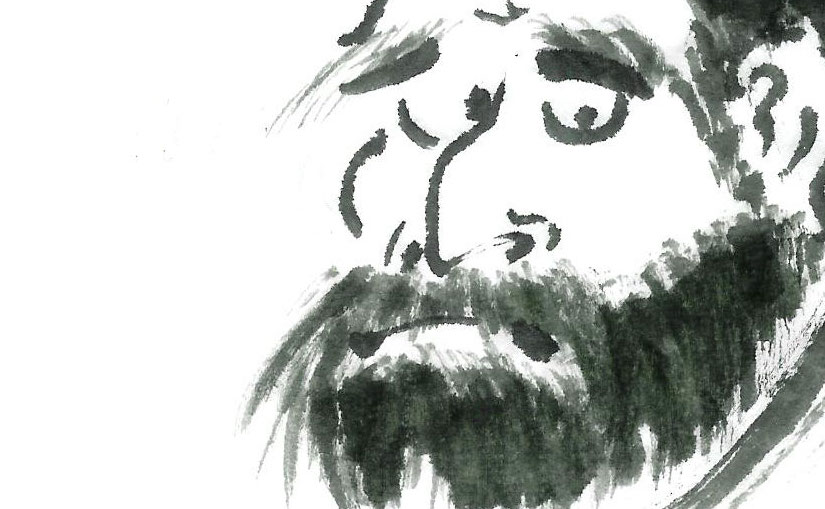 The exercise: Compose a short poem with no metaphor or simile in it.

Not that there’s anything wrong with metaphor. Some of my best friends are metaphors. But we in the West are metaphor junkies, thank you Aristotle (“to be a master of metaphor is the greatest thing by far, a sign of genius”). So it’s good now and then to go dry. What can you do minus that junk? How do you make a poem work without yer fix?

Hello, syntax and line. Hello, metonymy. Hello, objectivist mode, basically, though I save that for elsewhile. And coinages, hello too! Language is full of forces we are totally out of control of and yet surf fluently in our wake and sleep with astonished ease. Tweak them just a bit and you draw them into awareness and that’s poetry. (See what went on there with wake, e.g.? Didn’t intend it, just saw it and commented latterly, and that’s prose.)

Enough preamble, on to some student work.

Here’s one by Steve Lemma – excuse me, that’s “Goldenrod Steve” – that’s quite careful, in a seemingly careless way, with the composition, the putting-in-places, of its syntax – fragments and all. It also has an admirably various line, not just its length, also how little or much torque it asserts upon the syntax of the thought passing through.

Darker than
the
car,

than
your irreparable attitude.

Welcome to this side of the world,
kid.

You may n
ever make it back.

The under
belly is hungry
almost
as much as me.

I think a couple of the moves here, re: the line, are stretches, but that’s less important to me, as teacher, than that he’s messing around, trying stuff out. (BTW, I’m counting the comparisons as not similes, since they compare extant objects in the poem’s field, to others the same.)

First aside. “Go dry.” Is that metaphor or metonym? How about “that junk”?

Another one, by Rob Jones – turns out no one wants to be anonymous, why was I doing that, don’t remember, probably had a good reason that’ll come back to bite me – short and sweet –

That ringing,
A sound
I will never hear again.

My proposal to Rob was, cut the last line. With that line the poem is nailed to its occasion. Without it, the occasion’s forgot, and the language can widen beyond whatever thought happened to incite it. (This is an curious case of what Richard Hugo called the “triggering subject” showing up in the last line. But one feels it was held in reserve all the poem long – I’m suggesting, hold it in reserve even longer, till the poem is fine without it.)

Second aside. Compose, not write, because as I did say later, they mighta done a visual poem, and solved their problem right there. I give maddeningly open exercises. But in them every word does matter: “embody spring” means embody spring; “myth consciousness” means myth consciousness. Why so uptight? In the poem, too, every word matters, otherwise no word does, in which case, stop.

Here’s another, by Alex Hastings, who has a very Creeleyan ear for speech under pressure – pressure of strong feeling dimly understood (TOTAL INSIGHT MOMENT: Creeley was an avatar of Shakespeare), and she’s been learning how to get, not just the dimness, also the understanding and the strength, onto the page, by way of line, syntax, the tortured dance of them.

Legs
crossed over
cheap carpet, we
blink at our
each tired
faces and pick
another
fight.

Change the slightest thing here and you wreck it. For instance, fix the syntax, “each other’s tired / faces” – wrecked. The contortion of the syntax there recalls me to how my powers of language flee me when I’m in a fight with someone I love and who says they love me but isn’t seeming like that. I mean, oh my students, you can create great storms of emotion in a poem without ever naming an emotion. Also, FYI, without many adjectives – “cheap,” “tired” are the only here.

Third aside. Since I went to Urban Dictionary (“elsewhile”) – the poetry of that. Our natural unconscious and dionysiac poetic fluency. And let’s aleatorize the fuck out of it. My pasketti is boiling so let’s be quick also. Random number generator to choose letter then entry. Let’s say thrice and see what comes.

1. A technically bankrupt company that is kept alive with large infusions of government money for the sake of “stability” in the U.S. financial system. 2. A large financial company with negative net worth that continues to operate, despite having no clear path to solvency. 3. The UnDead of Wall Street.

what stoner says when mad

stoner 1: rrrrrrrs, i need money to buy weed, but i smoke weed because i have money.

Gratuitous Picture Of Yourself Every Fucking Day

I see a picture of someone who is asleep in class, “GPOYEFD”

So I was real worried, around word two, how I was going to get a poem out of this, but GPOYEFD saved the day. Does this not come together as an incisive remark upon the tedium a certain once awesome post-apocalyptic fantasia has come to?

Zombie? Company.
Rrrrrrrs.
Gratuitous picture of yourself,
every fucking day.

I go back and forth on the comma. Imagine it spoken by a career extra.

Coupla more. This by Lauren Edison, who like Alex is working in a short line, not quite as enjambed, and not quite as spare of sense data, but headed in that dir.

I wake
to a preset tune
and white plaster walls.
Barren, save for shadows.
I blink. Rollover.
My screen says 7:00
January 18. Monday.

This wall, too, is barren.

Lauren’s syntaxes are intact, untorqued – she looks for what can be got through denotation and lineation within the rules of normative syntax, inhabited austerely. I am on her case about titles.

And one more, from Haley Kenville, which I suddenly now realize is her myth consciousness poem, that I was looking for in the exercise she submitted for that assignment, and was kinda hard on. (I’ll do a post on that ex., I hope.) Hear myth mind in that third bullet point?

• Call ahead,
they’ll want to know you’ll be early
• Roll in late with hair
still wet from shower.
• Saturate trees with buds, so
they are prepped for your petal
firework finale
• Reign. Relax.
They have been waiting for your ascension

Not sure what she’s doing there with punc but that last line rocks my world. Because of the indefiniteness of the “you” – possible because the poem has let go of its inciting occasion – it points to me and to you, and anything green in anyone, even as it also calls to the Persephone-figure (as I read her) of the poem’s surface levels.

Last aside. Realizing once more how much of my teaching style comes from my Zen training. Don’t feed the ego – affirm the person. Cultivate intuition, spontaneity, not-knowing. Nourish faith in their inborn abilities, empathy, insight. And, be always poking, wherever they’re at rest, unsettle them.

And, to that last, I am always causing problems – as if my students didn’t have enough problems already? One asks me a question, and instead of answering him, I respond with a question. Then, as he’s working towards an answer, I interrupt him with another question. I must be maddening.

The intent’s generous – how can I in this moment help you further your inquiry – but I’m a limited human being. Right this moment anyway I’m feeling my limits. Often the generous is mixed up with stress or my own shit or simple fatigue or I’ve got a tummyache. I’m not often the Platonic ideal of Socrates the method seems to want.

Dude. Zen, Plato, you should ride a motorcycle, and then maybe write a book.

What am I here to say. I’m grasping towards a place where fucking it up somewhat is still okay. For them or for me. Hurting other people heedlessly is not okay – don’t do that in my classroom. You’ll hurt other people, I have, you will, but not heedlessly, please. Also, don’t be lazy – this is the Zen training coming in – treat this as the matter of life and death it is (OMG did I write that, do I believe it, I do). Other than that, be free.

And with that, my dream syllabus, any course

Don’t hurt anyone heedlessly.
Don’t be lazy.
Treat it as a matter of life and death.
Other than, in that, be free.

this post must come to an end. Oh and here’s Bodhidharma for ya.