Last day of my vis po class today. Gonna miss these guys, I am. Not often a group comes together so clear real and kind. Mean to post over the next week or two some of their later works, which have been bright and entrusting as ever.

All that follow follow the former prompt. This time round, the latter didn’t work out, quite so well. (I mean to write, before I’m done with this spring class, on how little it matters whether a given ex has worked out for you or not. For most students most of the exes are enh and that’s fine and expected. And one or two make for breakthroughs and that’s giddy and golden.)

This one harks back to our study of Judith Copithorne’s Runes and’s inflected maybe also by flash presentations on graffiti and calligraphy. Though the semblances most evident to me are Arabic script and maybe even Hélène Smith’s Martian writing though I don’t recall us discussing it.

Anyway it suggests to me that our early exercise on handwriting, which seemed mostly a bust at the time, might have set some seeds long to germinate.

This one’s a culmination of its author’s preoccupation with forces in the culture, ad copy junk food and so on, conspiring to benumb one. 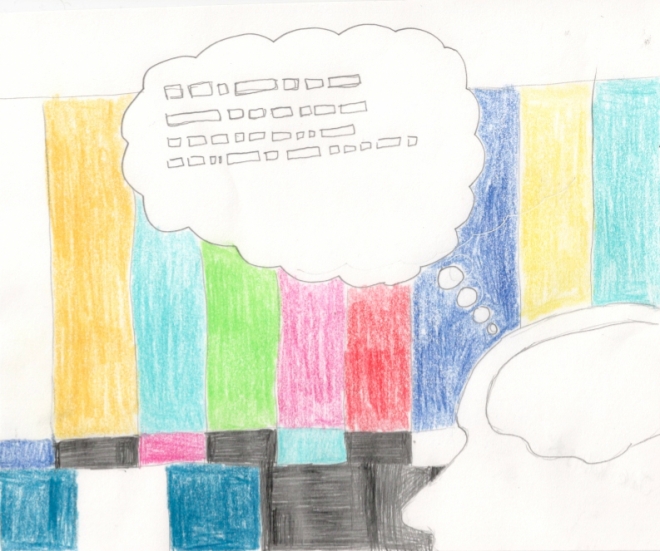 I should mention that the exercise comes in company with our work on Derek Beaulieu’s Local Colour, a reading of Paul Auster’s novella Ghosts that replaces every colour word with a swatch of that colour, all other words with the whiteness of the page.

I could dilate here on the symcomplexity of that project, or on the extraordinary anxiety it induces in some students (“You don’t ask what a waterfall means,” I said today, “why do you ask what the poem means?” “Nature – art,” said one student, and it’s a sound response, and because I didn’t feel like talking about Kant, I went to Bach. “You don’t ask what the Goldberg Variations mean, though, right?, you ask what they do.” Probably not a good pick, but my first thought, Beethoven’s 9th, has words in it, which complicates. A long parenthetical. Gist is, if there’s one, we got into a good discussion of just what one means by meaning, and’s pretty effing giving of a group of graduating seniors, Thursday of Dead Week.), but I’ll just send you to the text itself. Wread it!

Can’t quite put my finger on why this last one blows my mind.

Saw its author today on the plaza and asked her what it was like to make it – was she in the zone, an altered space, and she said she kind of was, there on the floor with her scissors and construction paper. What you Buddhists yo call samadhi, one-pointedness, and it does come through, so we get some of it, too.

There’s something inexpressible comes across in the whorls. Its imperfections are perfections. All that’s clumsy about it’s subtle. Makes me want to cry and don’t know whether w/ happy or sad.

This one’s her breakthrough poem; told her so; she thought that, too. Everyone in the class had one this time round, no one left out, some did early, some late, some with fireworks, some as quiet as a snowflake of exclamation points or a photocopy of onion skins. What a privilege to be a part of, my god.

2 thoughts on “Student work – Poems with no words in ’em”