On the far side of an intense burst of poem making. For a few weeks there I could do no wrong. Now though most of what I do is a strained imitation of what came full-throatedly before. If I were one of my students I’d tell me not to worry – time to lie fallow a bit is all. Since I’m me though I say time for some bloggery.

Here’s a fancy word I learned recently. Pareidolia. The tendency to see Christ in burnt toast, the Virgin Mary in soot stains on a wall, a man or a rabbit in the seas (the “seas”) of the moon.

We’re all pareidoliasts. My proof:

If you don’t see a face there you can stop reading – we have nothing in common.

From the Greek, para, beside, near, from, against, contrary to, + eidolon, appearance, image, ultimately from eidos, form, shape – the word Plato uses for his damnable forms. To make art out of such para-forms, and that’s where I’m headed, is give the philosopher an itch he shan’t ever manage to scratch.

Pareidolia coheres most around the human face – we’re made to make it out, and early, so early. Infant to mother, eyes to eyes, our survival in spirit depends on it, as much as our survival as bodies depends on the sustenance of touch those eyes signify.

But it seems to me there are other forms we are prone to see with hardly any prompting – trees, say. 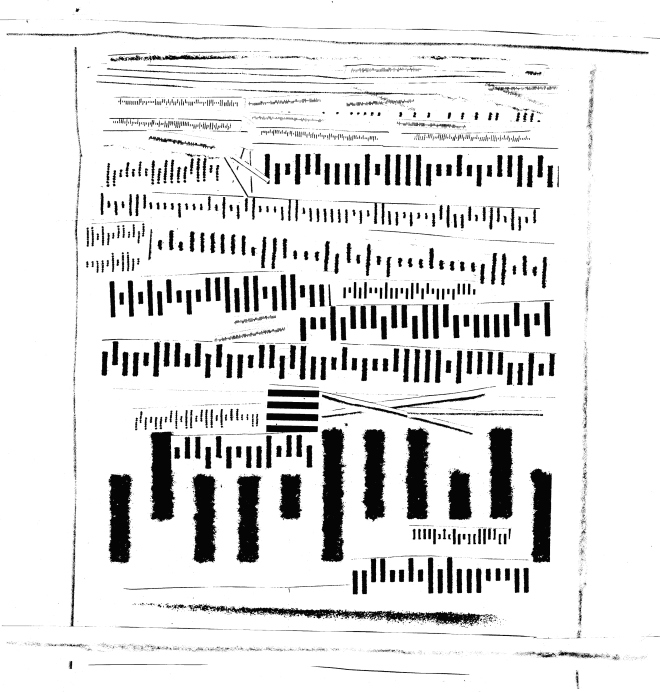 Fig. 1 Terror of the Tall Trees

This image is built out of junk mail bar codes (and the visual noise left behind by the strips of paper the codes are on when xeroxed). It’s the first one to show up in Dumuzi and is meant to sit right on the edge between “burnt toast” and “the ghost of Christ in burnt toast.”

The allusion is to Dumuzi’s dream, which he recounts to his sister, and the signs aren’t good.

A bit more about the handwriting sometime later. Working on a pretty/ugly hand that looks a bit like hurried wedged impressions in clay and a bit like clumsy medieval calligraphy and a bit like where my head was at when I make the strokes up to down and left to right.

And run he does. Not that it gets he anywhere but deeper to wit

And that’s what I got of an evening. Tell me what you think if you have thoughts. All this is new to and for and from and of me. C.