Revisited sound today. This time, with a view to, how does sound do work the good work, bearing up thought and feeling?

Had my students hold in hand, for their heft and texture, two petrous objects. You’ll see in a mo why the Greeky adj. One was sharp and jagged, rough-textured, a bit of railbed gravel. The other, smoothed and rounded, as out of a moving stream.

They passed those round. Took em back and said, One of these is a rock, and one is a stone. I’m going to hold one up in a second, and please write down, saying nothing, which it is, rock or stone.

Held up the jagged one. Write it down, guys, which is it, rock or stone. They wrote that down. Then shows of hands. Morning section, all but two said rock. Afternoon, all but none, said rock.

But how do you know, I asked, pretend dumbfounded. “Rock” and “stone” mean the very same thing in the dick-shun-airy. So how do you know the one’s the one, the other the other?

And we found our ways, in not too long, to these. “Rock” ends in a stop, you have to stop saying it abruptly, and that has a sudden, even jagged, feel. “Stone” ends in a nasal and you can extend the sound for as long as you have breath. That has a softer and more rounded feel. 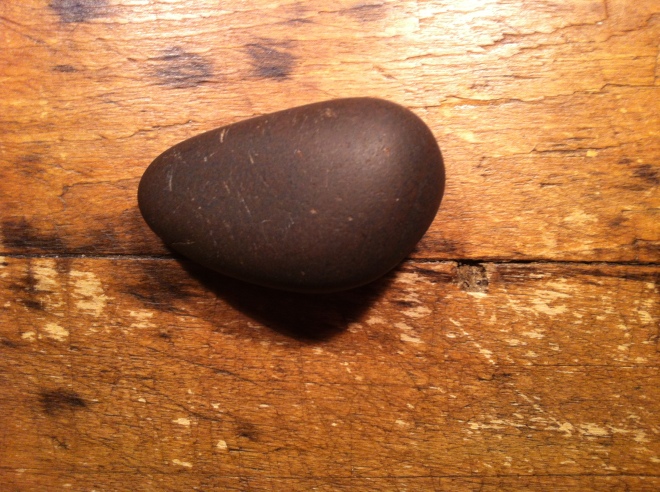 The words have the same denotations (dictionary meanings) but very different connotations (aurae of association). “Rock” calls to mind rough sharp jagged thangs, “stone” water-smoothy river-beings. And that’s in part because of their sharp and edgy, or smooth and rounded, sounds.

Shout-out to Mary Oliver, a line in whose poetry handbook gave me the idea, years ago. And, next up, one way to bring the thought over to actual words (not “rock” nor “stone”) of actual poems. Teaser, it involves a station of the Paris metro. Yeah that ol’ chestnut.

POSTSCRIPT. This on a night Republicans are poised to take command of the Senate, setting to stay maybe long enough to f*** up the climate for as long, or as short, as we’re like to be here. Go figger. Yo, intelligent design people, don’t you think, if there WERE an intelligent design, the designer would be a little less STUPID than sweet haphazard evolution’s given us? Um, the appendix? Um, mothers who eat their children? Um, obscenely short-sighted self-interested climate-science denial? Saw this fun on FB, where I hardly ever hang, not sure I’m as atheist as it, but.

Be well, all, someone’s got to, and maybe it’ll start a thing.

One thought on “On Sound (II)”