Disjunction often comes of suddenness—may be suddenness itself, given body, a form found.

Had my students working Tuesday on deep description. Pick one from this clump of grape leaves and describe it with sufficient devotion that another here, given this whole lot of leaves, hearing your account of yours, could pick that one out, unerringly.

They did and did and all good. The followup: Tune your antennae to beginning now and pick one phrase in your description that resonates beginningness. Write it at the top of a new page. Now tune to ending and pick one phrase that sings endingness. It goes at the bottom of that same page. Now, moving quickly, the first thought then the next first thought, write the paragraph that gets you from top to bottom. One restriction—can’t be about a leaf.

If each thing touches every thing (Indra’s Net) then disjunction is just in fun. No disruption except of our sense of disconnection. Blake’s Marriage of Heaven and Hell. Not everything but every thing. Means there’s all the space to move. 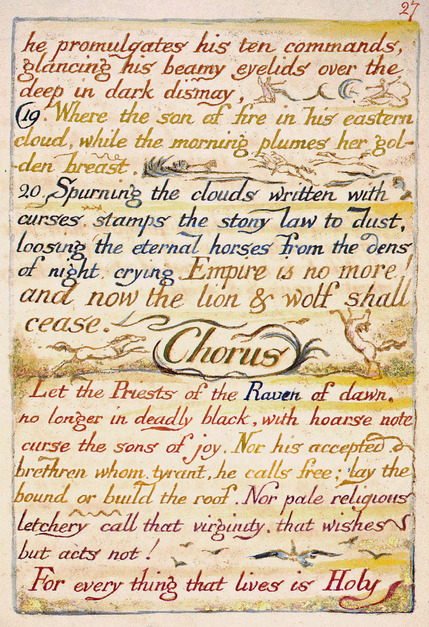 The way I put it in a poem that never found a public home.

The ease with each part touches each adjacent part.
Apples in a wood crate on a foldout cardtable.

Thought, as they worked away, too easy to sustain a through-line here, need to shake it up. OKAY I said STOP. On whatever word, or mid-word, stop. Draw a big dash. (Drew an em-dash on the board.) Put a period after it. (On the board.)

Snagged in a language of one who regathers himself after invasions and evasions as dimly as fiercely remembered. And, the insight didn’t keep me from being a somewhat total asshole to the woman I was there with and did stick with me through it, a year more, then she didn’t any longer, so.

A period after it and now pick up in a new place. Some other new subject, whatever, anything. Just don’t go on saying what you were. Day by day make it new. Day by day? Word by word.

To start, each word, anew. Meant to get to Tender Buttons. Sounds good, for another night than this, rain flying at my windows all.

POSTSCRIPT. After a dissipated start my afternoon class spent ten minutes talking about one line break and without repeating ourselves! The line: